Stories from people on the DF program

The Direct Funding program has been exceptionally valuable to our family.

Before starting on the program both my life, my husband’s and children’s lives were extremely burdened. Six years ago my husband was working from home full time and I often had to disrupt him to help look after my basic needs. As my body continued to worsen due to multiple sclerosis, his days and weekends were increasingly becoming more of caregiving ones. This put incredible stress on him as he already did the shopping, cooking and laundry. We could only afford minimal help at the time and used this to the best of our abilities.

Also, during part of that time our children were teenagers/young adults and the last thing we wanted to do was to have their developmental years disrupted by a dependent mother. Although they helped perform their necessary household tasks and assisted where they could, we wanted them NOT to be my caregivers. It was important to us for them to have as normal lives as possible and they have now responded by living away and being independent and productive people.

Prior to Direct Funding, our financial burden had increased tremendously. I could no longer work and my husband’s career demands increased. As a result of these changes, we had to increase caregiving hours. Thus we used other financial means which put us into considerable debt. Upon receiving Direct Funding and becoming a Self-Manager our monetary situation has become manageable. We hired a full-time live-in caregiver which has allowed my husband to travel for business. Funding also reduced stress in the household. Our caregiver contributes significantly to our living by tending to my activities of daily living, maintaining the house, cooking, doing washing and ironing, as well as accompanying me to medical appointments. The atmosphere in our home is more positive allowing everyone involved to have an easier time of dealing with a difficult situation.

Most importantly, being on this program has allowed me to remain in my home. Without Direct Funding, the financial, emotional and physical demands on both my husband and me would have resulted in my having to move to a nursing home. Not only would my quality of life have been diminished but my familial relationships would have deteriorated. By being allowed to remain in my home, I can still have family and friends over and remain in engaged relationships in a comfortable environment. Also, I feel I have some control over my life by being involved the directing of some of the cooking, gardening and socializing.

Finally, the cost of home care is approximately half the cost of institutionalized care. Direct Funding is a win -win situation. My family and I are very thankful for this program which has impacted our lives in a most positive way.

Angela, 51, is a wonderful person accustomed to living in the country, north of Kingston, with her husband Doug.

A year ago, Angela was diagnosed with multiple sclerosis (MS) when she suddenly could no longer walk. Her MS came on like a stroke. She went to the hospital, then completed rehabilitation and was subsequently moved to a long-term care (LTC) facility.

Life for both Angela and Doug had become extremely difficult. Angela only went home once every three weeks from the LTC facility because there weren't appropriate community options in her rural area. The family was out of cash and had to turn to their RRSP savings to make the co-payments charged by the LTC facility. Sometime last year after Angela's MS diagnosis, Doug had a heart attack. After evening visits with Angela at the LTC facility, he would find it heart breaking looking back at his wife sitting in the window waving goodbye and neither of them knowing whether this was forever their new normal.

Last summer, at his wits' end, Doug happened upon the local Independent Living Resource Centre near his workplace in Kingston. He spoke with Neil, a representative of the Self-Managed Attendant Services - Direct Funding Program. Doug had certainly gone to the right place to talk about his and Angela's desperate situation. Upon hearing how Direct Funding works, Doug saw that it could be their lifesaver, giving them an opportunity to get their lives back.

Recently Angela left the LTC home and moved back to her own home to be reunited with her family - a very exciting time for them all. Neil and the Centre for Independent Living in Toronto (CILT) provided Angela with lots of support and information about how to arrange the transition to managing her own services. After interviewing and training job applicants, Angela is now employing her own attendants. She is happier, healthier and once again a full, participating member of society.

Government investment in the Direct Funding Program allows for real benefits on many fronts, for example:

Return to History
Continue to Testimonials


"I used to view my disability as being in bed chained down at my shoulders and my hips, waiting for someone to free me. Well, I can honestly say that Direct Funding has come along and done that!"
- 25-year-old man living with parents 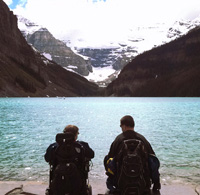