The Story of Noel Marshall

Our late son, Noel Marshall, had been a Direct Funding Self-Manager from age 16 until his death at 29. Early on it gave him and us freedoms most young adults with disabilities couldn't have. He got to go out with friends and experience life as a young person should. Being an employer at 16 did cause a sudden maturity. As all Self-Managers know, attendants become much more than employees, they become friends and keeping friends inline and on time has its challenges. Learning to hire was one challenge and having to fire was a mountain at first, but he did it several times and learned how to do it legally and respectfully.

After finishing high school, Noel wanted to try college but was unsure it could happen. Working with Direct Funding and bunking with another Self-Manager in a special accessible room at Algonquin, they were able to use their pooled resources to extend care around the clock. Although he was only able to go for one year, it was the experience of a lifetime.

As his disease progressed, Noel applied for and received more hours, allowing him independence while living at home, a challenge even for able-bodied young adults! He continued to be able to explore the city, plan trips, meet friends and live a full life because Direct Funding was there. At age 26 he had a health setback and upon being admitted to the intensive care unit (ICU) the nurse practitioner in charge of the complex care team was amazed at how Noel could be that age with Duchenne's Muscular Dystrophy and they didn't know him yet. That was the power of Direct Funding: allowing him to be cared for at home.

His health stabilized but at a level that would have required him to live in the ICU for the remainder of his life, because he now needed around-the-clock care due to ventilation needs. The complex care facility in the city refused to take him, citing his complex needs. I still can't figure that one out! Not prepared for him to stay in hospital if he could live at home we began negotiating on his behalf with Direct Funding and the local Community Care Access Centre (CCAC) to arrange for 24-hour assistance at home. The argument was simple: an ICU hospital bed is conservatively $5,000 per day, he could be better cared for at home and have independence for under $350 per day. We were shocked to learn there was no decision maker in the entire health care network who could make what seemed a simple decision. Again, Direct Funding stepped up to provide the maximum they could squeeze out of a tight budget and CCAC handled the nights with nursing by using registered practical nurses to stay in their budget.

After 45 days of hiring new staff and gradually ramping up his care, Noel moved back home for good. He had a good additional 19 months living at home, being able to go out for shopping, lunches, attend concerts and do day trips, all because Direct Funding was there.

There is no question about the value of the Direct Funding program for Noel but also to the health care system, as it likely saved more than $1 million that it would have cost to have kept him in hospital with little or no quality of life. Well done, Direct Funding: keep up this essential program.

"I used to view my disability as being in bed chained down at my shoulders and my hips, waiting for someone to free me. Well, I can honestly say that Direct Funding has come along and done that!"
- 25-year-old man living with parents 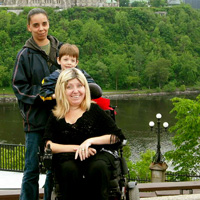